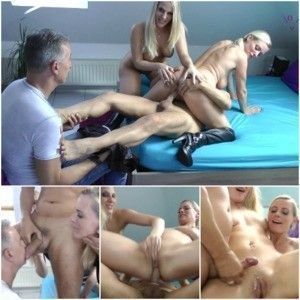 Mistresses torture their boyfriends for cheating

Mistress convinces her man to be a cuck

When this mistress realized that she will never get satisfied by this loser, she had to get some on the side. But she did not want to lose the benefits of being with him. So she broke him down slowly and she got him to agree to her fucking another man in their house and while he watched. She told him he would also enjoy seeing her getting fucked by another man.

Mistress cuckolds her man and shows him another man's used condom

This mistress wanted a man who could make her feel like a woman. That man was not her boyfriend. She was frustrated and when he asked her what he could do, she told him to let him fuck another man. He did. She made him watch all of it and when they were done, she even showed him how big the condom the other guy had used was. And the his seed inside was a lot too.

Mistress Emily was not happy with her man. He came too quickly and did not satisfy her most of the time. She wanted him to learn how a real man does it. So she tied him to a chair but instead of doing anything to him, she had him watch as she called another man to their house and she went ahead to fuck him as he watched. She told him to take tips from him.

Mistress humiliates and cuckolds her man

Mrs. Henry and Henry himself had not had good sex in a while. They wanted to have a little bit of fun but the mistress decided that she needed another dick. But she wanted it while he watched. That way, it would not be cheating. The guy came and together, they humiliated Mr. Henry and had fun at his expense. He was even more surprised that he kinda liked it.

Princess Kate cuckolds her man for having small cock