These 18 y.o. hotties - Jenna and Krista - don't need a man for sex - they're a happy lesbian couple and use guys only to serve and pay them! This guy had to pay them a couple hundred dollars just to be allowed to sit down next to their bed and lick their filthy feet while they're making out with each other. Most of the time they simply ignore him and enjoy the foot worship but sometimes they also verbally humiliate this guy for being such a loser that sucks lesbian's feet and even pays them to be allowed to do so!

Boots and feet on cuckold's face

Murderotica and Courtney only keep men around as their slaves but they're 100% lesbians. They sit on this slave's face while making out and they don't care about the pain they're causing this loser. And if he isn't able to breathe under their combined weight that's his problem - and his only! 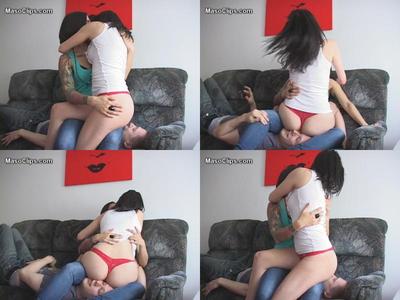 He gets the fun - you get the humiliation

Oh my god - look at this sexy chick teasing you in the cage. She tells you about her hot lover getting to make out with her and fuck her while you're living in the cage in her basement. She knows you're obsessed with the sexy body of hers - but you'll never get closer to it than now!

Mistress Nivia starts this clip by pouring some sparkling wine for her and her boyfriend into glasses. Then she kisses her boyfriend and spits on the floor - of course you'll have to lick it right from the floor - her spit mixed with her boyfriend's spit - uh, so gross! But it gets worse - next you've to lick her feet - and then HIS feet .....